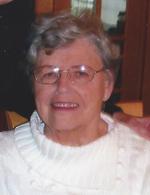 (nee Krainik) Age 91. The morning of September 4, 2019, Barbara Ward found peace and rest after a decades-long battle with multiple health challenges. She joins her husband of 60 years, Robert, who preceded her arrival in Heaven on June 20, 2011.

Barbara had the gift of creativity including a love for sewing, gardening, and music. She enjoyed singing in multiple choirs over the years, including the St. Agnes Church Choir and the Milwaukee Archdiocesan Choir. She lived a life of service as a registered nurse, a Girl Scout leader, a poll worker in the Village of Butler, and a volunteer in her parish church.

In her later years, Barbara found great joy in her community at Hart Park Square in Wauwatosa. She enjoyed the opportunities for crafts, choir, good friends and even participated in Wii Bowling until two weeks before her death.

Barbara’s family would like to extend special thanks to the staff at Froedtert Hospital and Seasons Hospice for offering guidance, comfort, and support over the past two weeks. Loving thanks also to the team at Hart Park Square Senior Community for supporting Barbara during these final rich years of her life.

A Memorial Mass will be held on Saturday, September 14, at 1:30 pm at Hart Park Square, 6600 W. River Parkway, Wauwatosa. The family will receive guests from 12:30 pm until the time of the Memorial Mass at 1:30 pm. Barbara’s burial will be private. Memorials on Barbara’s behalf can be made to Alverno College’s Barbara Ward Nursing Scholarship.