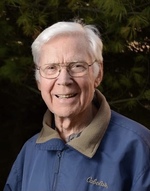 Born in Bowler, WI February 23, 1930, Bernie was raised on a farm and later moved to Milwaukee, WI. He proudly served in the U.S. Army during the Korean War and was a member of the VFW Post where he volunteered as well. After his service, he enjoyed a long career as a Journeyman Tool and Die Maker. He was truly innovative and enjoyed designing and building products and things. He was a longtime member of Faith Lutheran Church in Germantown, WI.

Bernie also loved the outdoors. He walked every day. Every other year, he would make the journey to the Boundary Waters in Canada with his brother-in-law, sons, nephews and grandchildren to go canoeing and fishing. He loved camping and canoeing down the Peshtigo and Wolf River. He enjoyed traveling in their motorhome to Arizona, Texas, Alaska, and other great areas of the United States.

Bernie was a positive influence to everyone he met. He was the most genuine, kind, and selfless person you could meet, and had such a positive outlook on life. He loved to dance and sing and was part of the men’s German Milwaukee Liedertafel choir. He was a true mentor to his nieces, nephews, and grandchildren, whom he loved to read Dr. Seuss and Peanuts books with. He will be dearly missed.

A Celebration of Bernie’s Life will take place on Saturday, February 20 from 1-3 PM at the Wisconsin Memorial Park- Chapel of the Chimes, 13235 W. Capitol Dr., Brookfield. Service to follow at 3 PM followed by military honors. In lieu of flowers, if desired, memorials to the Alzheimer’s Association or St. Jude’s would be appreciated.