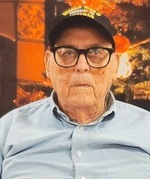 Long time resident Ernest Darrel “Ernie” Boggs of Germantown, WI, more recent twenty-year resident of Wisconsin Veteran’s Home at King, WI journeyed on in his life Saturday, April 24, 2021 from a well-lived life of 99 years 10 months 18 days. He was born to John McDaniel Dowell & Edith (Tompkins) Boggs on Monday, June 6, 1921 in Jenkins, Letcher Co., KY. He married Rosemary Spek in Dubuque, IA on Saturday, February 1, 1941 having a very loving marriage of 62 years. He served in the U.S. Army during WWII. He was there on D-Day in 1944, fighting on his birthday.

The couple made their home in Germantown, WI where they raised their two sons and owned businesses at one time or another in their earlier years of an Exxon Mobil gas station - repair shop and restaurant, Ernie’s Auto Body and Painting, the first laundromat in town, and a sweet shop, and even managing an apartment building in their later years. Ernie not only served his country but he served his community by being the first constable in town, the first chief of police and a volunteer fire fighter. You would see Ernie selling poppies around Memorial Day and then Christmas trees for the American Legion VFW Post 9202, as he was an active life member. Ernie was an outdoorsman, who hunted deer and geese and he loved fishing! He was an avid trap shooter. His CB handle was “Wild Goose" during the CB and ham radio fad. Ernie and Rosemary would meet regularly at Hardee’s with friends of their "Breakfast Club" in their retirement years.

The Boggs Family would like to thank the many years of care given to Ernie at the WI Veterans Home at King and the hospice care given by the Theda Care Medical Center - Waupaca - for that we are very grateful.