To share your memory on the wall of Kenneth Retzer, sign in using one of the following options:

Menomonee Falls - Died August 11th 2020 surrounded by the love of his family at the age of 91. Loving husband and friend to Marie (Brophy) for 60 years, and loving father to Greg (Amy), Annmarie, and Marilu. Ken w... Read More
Kenneth W. Retzer "Ken"

Menomonee Falls - Died August 11th 2020 surrounded by the love of his family at the age of 91. Loving husband and friend to Marie (Brophy) for 60 years, and loving father to Greg (Amy), Annmarie, and Marilu. Ken was a very proud grandfather of Greg and Amy's children: Anna, Jack, and Janie. He was also uncle to several nieces and nephews.

Born in Milwaukee, the son of Walter and Emma (Zingsheim), Ken was preceded in death by his parents, his brother Robert Retzer and his sister Marilyn (Walter) Johannsen.

Ken graduated from St. Lawrence Grade School and Marquette University High School. Both Ken and Bob helped their father run his grocery store, Retzer Better Foods, until the Korean War began. Ken initially joined the Army National Guard, before transferring to the Air National Guard, working as a Technical Sergeant in Japan during the war.

Upon returning home, Ken entered Marquette University's College of Engineering. In his senior year, he married Marie, graduating as salutatorian of his class soon after. He worked as an Electrical/Design Engineer for the next three decades.

After retiring from Johnson Controls in Sept. 1993, Ken and Marie enjoyed spending winters in Arizona and traveling, most notably to Alaska, Hawaii, and Ireland. Sunday's during the summer were spent at Army Lake in East Troy with his family.

Ken and Marie joined St. Agnes Parish in Butler in 1963, where they educated their children practiced their faith and made many great friends. We encourage memorials in Ken's honor to the St Agnes Day School Endowment Fund c/o St Agnes Parish 12801 W Fairmount Ave Butler WI 53007.

Having enjoyed living in Wauwatosa for most of their married life, Ken and Marie moved to Dickson Hollow in Menomonee Falls five years ago.

Due to COVID-19, our family's primary concern is safety for all at this time. The family will have a private funeral Mass, at St Agnes on August 21st.
Read Less

Receive notifications about information and event scheduling for Kenneth

There are no events scheduled. You can still show your support by sending flowers directly to the family, or planting a memorial tree in memory of Kenneth Walter "Ken" Retzer.
Plant a Tree

We encourage you to share your most beloved memories of Kenneth here, so that the family and other loved ones can always see it. You can upload cherished photographs, or share your favorite stories, and can even comment on those shared by others.

Plant a Tree in Memory of Kenneth
Plant a tree 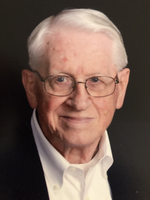