To share your memory on the wall of Patricia Lawrence, sign in using one of the following options:

Provide comfort for the family of Patricia Lawrence with a meaningful gesture of sympathy.

She attended Thiel College in Greenville, PA and upon her graduation took a teaching job in Ridgeway, PA where she met and fell in love with Jim Tom Lawrence to whom she was happily married for 57 years until his death in 2009.

After their wedding Jim and Pat moved to Tulsa, OK where their first son, Thomas Leslie, was born. The family then moved to Milwaukee and eventually to Thiensville. Their daughter, Martha Jane, and second son, Samuel Patton, came next before the family moved all of one block where Pat lived for 55 more years.

Pat and Jim were charter members of Crossroads Presbyterian Church in Mequon where she proudly served many roles. She was a Sunday-school teacher, an elder, the first women deacon and later served at both the Presbytery and Synod levels.

She was also very involved in the Mequon Thiensville PTA as well as the AFS program at Homestead. Pat loved God, her family, and the Green Bay Packers.

Pat is survived by her son, Tom (Penny) of Tallahassee, FL, their daughters Carice Cartwright and Hannah Duerden, daughter, Martha Morse, of Thiensville, her sons Andrew and Mark, and son, Sam (Deb) of Madison, WI and their children Alix and Reed. She is further survived by her seven great-grand children, and one great-great grandchild, and her very special niece, Robin Ruse Reinhart. She was preceded in death by her siblings and husband.

A visitation and service will be held at Crossroads Presbyterian Church on December 22nd from 1:30 to 3:30. The service will be at 4:00 with a reception to follow at Libby Montana’s in Mequon.

We would like to especially thank Home Instead and Compassus Hospice for the care and support they gave to her in her final days.

We encourage you to share your most beloved memories of Patricia here, so that the family and other loved ones can always see it. You can upload cherished photographs, or share your favorite stories, and can even comment on those shared by others. 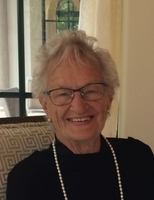