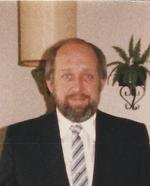 Paul served in the Army during the Vietnam War, and worked for over 46 years at Metal Technologies and Briggs & Stratton.

A Memorial Service will be held at a later date.